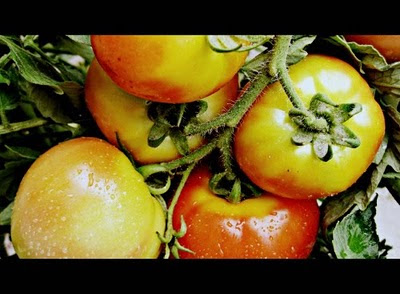 "Over there! Oh, could you please put some more tomato plants over in that corner Anthony?" Maria directed her husband of sixty years as she wiped the sweat from her brow. For Maria tomatoes were a passionate affair.

Maria had belaboured her duty, assured all the effort would accrue great dividends as the best tomato sauce on the block. After all, She had to, she must, grow enough tomato pasta sauce to last all year long.

Each year someone wanted her famous tomato paste and sauce. It was indisputably the best homegrown tomato sauce in town. of which Maria was famous. Her tomato plants covered virtually every possible inch of heaven's half acre.

It was Anthony after all who cultivated the garden. He did the marketing too, selling her goods in the neighbourhood from his wagon. He had kept Maria happy for years with his clowning around, always so jovial and lighthearted. Anthony always giving to those neighbours who look like they could use a jar of Maria's finest.

Today Anthony might have thought Maria's passions verging on the obsessive, but he continued to follow her often demanding commands.

Maybe it was the heat or his weak heart but Anthony finally had had enough; "Oh, Maria, I've gotta take a break, ok?" said in his adorable Italian accent.

Maria should have considered Anthony's request, he had been slaving in the garden all morning without much for breakfast.

Not that Maria had not thought often of Anthony and hs heart condition, he was pushing nearly 85. Yet she was just so engrossed in her need to be the undisputed Tomato Queen of the block she probably forgot Anthony's condition for a moment. Had she had thought that the heat and the stress, but Maria convinced herself he was ok.

"Even though Anthony had been complaining of his heart the night before but he had taken his daily aspirin and he felt alright; Anthony will be ok." Maria shrugged off the thought and continued to water her plants. Anthony had always been the strong one, and she knew he would always be there for her. "Nothing will happen to Anthony". Maria had convinced herself.

The sun was just breaching the meridian point of high noon. It must have been 40 degrees Celcius in the shade. Maria kept working, pruning, weeding and watering she had to get this watering done. She had awoken late in the day and needed to catch up with her usual schedule. The plants had looked so dry, they might die, baking under this grueling heat. Occasionally Maria looked over her shoulder at Anthony three rows down; she could see his white straw fedora bobbing through the long staked lines of tall tomato plants. She knew he was never far away.

Suddenly Maria felt a sharp pain in her stomach.

"Anthony, Anthony,...do you hear me Anthony?" Maria said his name quietly at first, then louder and louder until she screamed his name. "ANTHONY!!!"

The sirens had just been turned off as the neighbours started to gather near the curbs of the surrounding residences. All the neighbours had started to come running over to Maria unrelentingly crying on her paved driveway.

Ninety year old Mr. Stanley Janson had his just finished watering his prized Irises in his front yard when he heard the commotion. Now he stood in a pool of water, his hose dragging having been dropped to the ground. As if in suspended animation, Stanley's mouth agape, drool running down the corners, obviously stunned and nearly sunstroke by the cruel midday sun. Maybe he was standing in the gap waiting because he could not move an inch although he so wanted to help.

First on the scene was Betty Green and the first to hear Maria's earth-scattering screams from her screen-in porch. Maria started to calm down as she allowed Nurse Betty to administer first aid to Anthony. At once, and like a true Florence Nightingale, Betty ran to the emergency scene like a nurse from a M.A.S.H. unit. Betty had performed CPR, for at least one half hour, until the ambulance arrived. Betty had coached Maria to dial 911 as Maria could barely hold herself up, her knees weak, so overcome with heartfelt grief. Maria just managed to get hold of the portable phone she kept on the balcony on the wrought iron fence.

Betty lived on the otherside of the couple's lawn had run out of her front door of her cottage bringing her first aid kit. Betty was a cottager, only visiting her place during the rare times she could take vacation time from her duties at the hospital. Betty took full command of the scene, providing the most care she knew how to give the seriously ill gentleman and neighbour.

Unfortunately, it was too late, Anthony had transpired, Betty looked downcast at the ground. Maria knew exactly what this meant. Maria started to cry and Betty was there to comfort her. Now other neighbours arrived asking if they could help in anyway they could. Betty said she had to go to the hospital with Maria and there really was not anything more anyone could do at this time.

Mr. Janson piped up from across the street; "Does this mean I wou't be getting my order of tomato sauce?" Betty rolled her eyes knowing Mr. Jonson was forgetful, having early stage Altzheimers. "We'll be back soon Stanley; keep the fort will you?" "Sure thing Betty! Praying Anthony will be ok!" Mr. Janson piped in during an unusually lucid moment considering the heat of the day.

Betty drove Maria strraight to the hospital and reassured her that this was just Anthony's "time". Maria fought back her tears, but could not. Through tears she could not help but feel guilty as to what happened to Anthony. Maria
said with solemness; "It was all my fault, I should have never let Anthony work in the hot sun; he had a heart condition". Maria grabbed her chest suddenly, but continued walking. She was determined to be there with Anthony at the hospital, she could not leave her husband's body alone.

As Betty walked Maria into the hospital she felt she had died. There standing in front of her was Anthony. Maria almost fainted. "Anthony?..." Her expression was priceless. "Can this be real" Maria looked as dumbfounded as Mr. Janson.

Maria smiled the widest smile ever; "Are you a ghost Anthony?"

Anthony replied matter-of-factly; "Why do I look like a ghost Maria? It must be because of those darn tomatoes Maria; it was too much, I told you! Did you know you are a slave-driver Maria? Now Anthony smiled a huge smile. "Maria, come here and give Poppa a big hug!". Tears of joy streamed down Maria's face. She absolutely glowed like she had as a teenager when Anthony first met here in Italy so many years ago.

Anthony answered "Well at least the neighbours will be happy with all those tomatoes! It's a bumper year!"

"Do you think Mr. Janson will get his case he ordered?" Maria inquired. "Oh, don't worry about the neighbours, Maria. I've already taken care of that!" Anthony said point blank.

"Ok, Anthony, but how did you do that?" "Oh I talked to Betty a year ago when I first got sick and let her do the harvesting of the tomatoes, I put it here in my Will. Anthony pulled out some papers from his pocket".

"I am so glad we don't have to worry about unfinished business!" Maria sounded releaved.

"I love you Tony!" Maria exclaimed with great joy. "As much as your tomatoes, Maria? Just joking; I love you too, Maria - so much!"

Come and make some Tomato Sauce with us over at Magpie Tales! Write Poetry Write Short Story; just write! It's a tasty dish! For sure!

Quote of the Day

chiccoreal
The same old Jane you came to love and lost. But that's life!